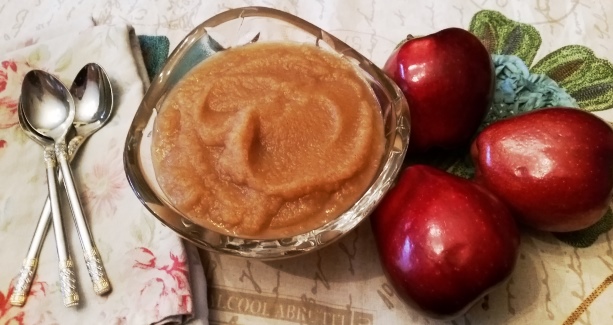 The Backstory: When my son was just a few months old, I started to make a lot of his baby foods from scratch. I’m not sure why–I wasn’t on the organic/homemade-is-best bandwagon, but I became a mother late in life (42) and doing little things like making simple foods for him became such a joy to me. More of the Backstory after the recipe… 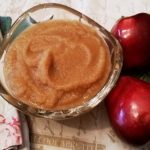 The sweet and crisp flavors mixed apples and the spicy tang of cinnamon combine to make a simple, delicious and foolproof applesauce. Perfect for latkes, on its own and as gift.
Prep Time 10 minutes
Cook Time 10 minutes
Total Time 20 minutes
Servings 3 cups

Before you serve, the top layer the apple sauce may seem firm. Simply stir the applesauce well before serving and you will have a perfect consistency. Enjoy!

…The Backstory continues: I know it sounds corny, but to this day, (he’s 9 now), whenever he asks for cinnamon applesauce, my heart melts. Which is why I still make it for him. I also make another version of this recipe with blueberries, which couldn’t be any easier as it literally calls for the addition of heaping cup of blueberries while the mixture is in the food processor. No heavy lifting there.

Growing up, applesauce was a staple at my table. My father adored it and ate it all the time, almost as a side dish. Now, no offense to mom, but after making the real thing, the jar variety–and plenty of them are delish–don’t quite cut it anymore. Applesauce always turns up, of course, at Chanukah, as a an accompaniment to latkes, and apples are a reminder of the abundance of fall and the sweetness of our High Holy Days.

If you really want to make someone’s day, take the 20 minutes–that’s all it takes–to whip up a jar of homemade cinnamon applesauce or blueberry applesauce. Pour it into a decorative jar, tie a ribbon on and attach the recipe. Someone will love you for this sweet, homemade reminder of childhood.