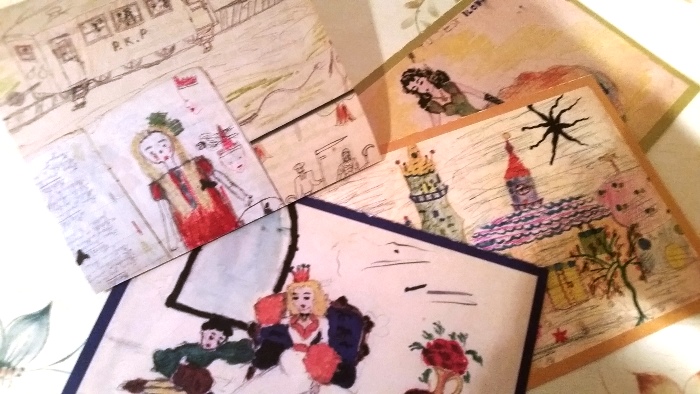 My family is proud to support the United States Holocaust Memorial Museum and each month, we enjoy learning about the fine work that the Museum does to honor the survivors, those who perished, and to teach the lessons of the Holocaust to people around the world.

This past month, we received a small packet of beautiful note cards as a gift of appreciation for our membership. Included with the cards was an insert called A Child’s Story of Survival, which told the story of Alona Frankel, a little girl who was just two years old when her parents were taken into hiding after Germany invaded Poland and her family was forced to flee. Unfortunately, the person hiding Alona’s parents could not take Alona, and she was handed over to a Polish woman, who agreed to hide her, provided Alona’s parents sent her money.

Alona was away from her parents, living on a farm with farm animals, and likely very lonely. She started to create drawings with scraps of paper that were later reproduced into the beautiful photographs on the cards you see here. The Polish woman sent the drawings to Alona’s parents as proof that she was alive during their years in hiding. Can you imagine? No matter how Alona must have been, missing her parents or frightened she was to be without out them, she managed to create such beautiful works of art.

When I read about Alona and looked at the stunning cards, I knew this was an opportunity to talk to my own kids about children’s lives during the Holocaust. They had been learning about the Holocaust in Hebrew school and knew about it because I had told them about a very special cousin in our family, Elaine, who had been in Auschwitz when she was 15 years old and had survived.

And so I used Alona’s story to seize the moment. I took the beautiful cards and laid them out on my kitchen table and asked my three kids to join me. They all love to write or draw and so I knew they would immediately reach for the cards. And they did. They asked where they came from. They asked who made them. I said a little girl named Alona Frankel did, between 1942 and 1945. They just looked at me. And then I told them the story.

They asked questions about why Alona couldn’t live with her parents and I explained as simply as I could that sometimes families were separated during the war. They were quiet for awhile and then, as expected, they wanted to keep the cards. I let them divide them up among themselves (for once, no fighting) and then I did something I’ve never done before: I asked the kids if they wanted to make a donation to the Museum and explained that the Museum was responsible for making sure that stories like Alona’s were told to people all over the world. Our kids give regularly tzedakah at their Hebrew school and sometimes they put money in the tzedakah box that sits on our kitchen counter, but never before to an official organization.

Two of them loved this idea and ran up to their rooms to their piggy banks. They came down with their donations and proudly offered it to me. I told them how proud I was. I asked if they wanted to write a note or letter to accompany the donation. My son, Morgan, sat down at my computer and asked me to help him type the following:

I often wonder how something that carries so much sorrow can morph into so much light.