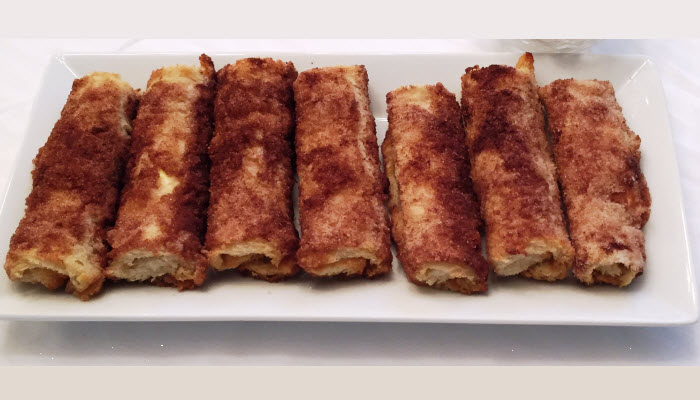 These easy-to-make white bread cheese blintzes are loaded with cinnamon, nostalgia, and will bring you back to your childhood.

The Backstory: When I think of white bread cheese blintzes I am immediately transformed back to the lazy days of summer circa  late 1940’s and the 1950’s. These were some of the happiest times of my childhood. More about these mouth-watering creamy delicious white bread cheese blintzes later. This was when the Borscht Belt was probably at its peak.  The place was the Catskill Mountains in upstate New York.  The hotels were booming, the entertainment was the best and the food was outstanding. Dean Martin, Jerry Lewis, and a host of other comedians, singers and dancers roamed from hotel to hotel. More of the Backstory after the recipe… 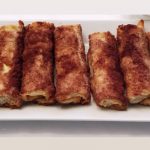 …The Backstory continues: We were fortunate to spend our summers at different bungalow colonies.  These places consisted of two bedrooms, one bath, and a kitchen with a screened-in porch. It was easy living and a fun place for kids.  Dads always came up for the weekends. Coming from the “City”, the trip took hours.  There were no turnpikes, just old country roads that took you through small towns. I remember the midway point was The Red Apple Rest.  But the main point of this is the foods that I recall.

My mom prepared foods that my dad didn’t enjoy.  He was a meat and potato guy.  So every summer mom made things that she liked.  One of the things was white bread cheese blintzes, a recipe my mom got from one of the “girls”. There were other summer dishes, but this was just one of those once-a-year meal.  And every year my sisters and I, well, we ate whatever, was put in front of us.  I didn’t appreciate the blintzes then but years later when I was fortunate enough to be served them, they were so delicious.  It is amazing how food can bring back pleasant memories of long ago.