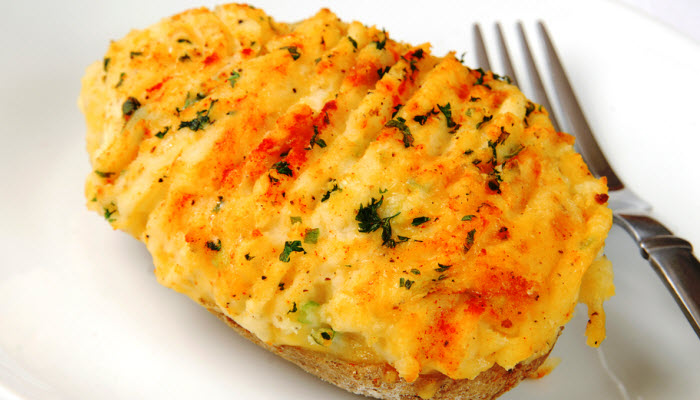 Twice-baked potatoes are creamy and savory on the inside and cheesy and crusty on top of the potato skin. That’s our kind of potato heaven!

The Backstory: Twice-baked potatoes are comfort food and then some. These are the potatoes that everyone loves–the ones that are baked, scooped out, put back into the potato shells and then topped with all kinds of delicious toppings. Believe it or not, they’re actually fast and easy to make and can also be prepared quite simply. More of the Backstory after the recipe… 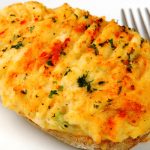 Baked potatoes are not the most colorful of dishes, but when you start adding toppings--look out. Even in their most simplest forms, twice-baked potatoes are delicious (and nutritious). Be creative and don't forget to look for leftover veggies to top off your potatoes.
Course Sides
Cuisine American
Prep Time 10 minutes
Cook Time 20 minutes
Total Time 30 minutes
Servings 2 people

…The Backstory continues: I first made this when I was a newlywed. That would be around 1960. I rarely cooked in the early years of marriage. On the rare occasion that I did, I made this potato dish.  My husband loved potatoes any way they were prepared. This was one of his favorites  He would devour the potatoes and I got to eat the skins as he wouldn’t touch them. He had no idea what he missed! I still think they are the best part of a well-cooked baked potato.

Twice-baked potatoes are also a great way to use up leftover vegetables (or get them into your kids in the first place). Just saying.