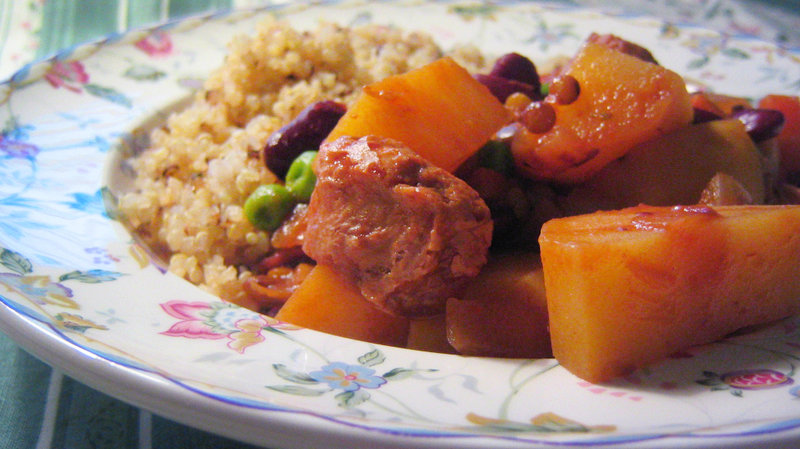 Start this slow-cooking, traditional cholent stew the night before Shabbat for a delicious, cook-free Friday night.

The Backstory: Traditional cholent is a savory, fork-tender stew that dates back thousands of years. It was appropriately created centuries ago into Jewish culture as a result of Jewish laws that restricted cooking on the Sabbath. In order to create a delicious meal that could be served without having to turn on the stove, this slow cooking stew would be started early on Friday before Sabbath and would be kept cooking in a slow cooker or on a hotplate overnight until the following day when it would be enjoyed as a midday meal following prayers at the synagogue. More of the Backstory after the recipe… 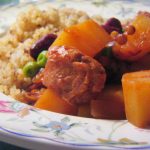 This traditional, slow-cooking stew is a hearty, stick-to-your-ribs kind of meal that truly satisfies. It can be made overnight or in a just a few hour with our modified version. No matter how your prepare it, the meat and potatoes will turn out fork tender, savory, and delicious.
Course Main Dish
Cuisine Jewish
Prep Time 15 minutes
Cook Time 3 minutes
Total Time 1 day 18 minutes
Servings 6 servings

…The Backstory continues: There were two benefits to this: cooking that started the previous day allowed for a meal to be pre-made without violating religious law and it also allowed beans and tough cuts of meat to become tender after cooking away for some 24 hours. Some historians trace the history of cholent from the Middle East  and then to Spain, and eventually to Eastern Europe. There are detailed histories of cholent throughout the world that can be found in Portugal, Hungary, Poland, Israel, and many other countries. It seems that if there were Jews somewhere in the world, there was cholent (flavored by local spices).

This hearty stew resembles a typical American beef stew with some variation: meat, potatoes, barley and beans are typical with different spices depending upon the region of the home chef. Sephardic Jews often added a whole egg to the simmering pot and often replaced the beef with chicken. Ashkenazi Jews, according to many of the cookbooks I’ve read, used kishka (who knew?) as well. The colors of the stew are deep, brown, and golden, and one glance tells you that this is a hearty, stick-to-your-ribs meal.