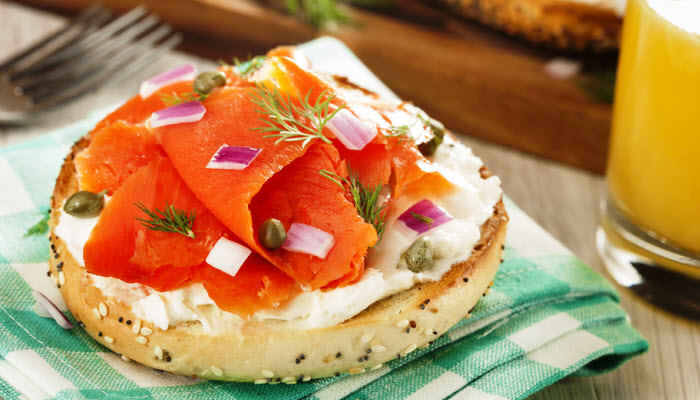 I guess you could say I’m a bit of an anomaly when it comes to ordering a sandwich in a deli: to me, the thinner the sandwich, the better. I know, I know, this is not how it’s done (or expected) when ordering anything between two slices of rye or a toasted bagel, but for whatever reason, and for as long as I can remember, I’ve always liked thin sandwiches. It drove my parents crazy as a child (as in, why did I have to order an entire sandwich (and refuse to share with my brother) when I’d only eat half of a half anyway, and my father would have to pay for it?), and to this day, it drives me crazy, when I try to order a bagel in some of my favorite NY delis, with just a single slice of Nova. Trust me when I tell you this–it simply can’t be done.

Now before you think I’m crazy, (true, but not about this), I’ve done my research. At my beloved 2nd Avenue Deli (my husband and my first stop when we get to NY for a weekend), one can order the bagel and nova plate, which comes with about five slices of Nova, cucumbers, tomatoes, onions, capers, etc. But one cannot order just one slice of lox. No can do. You can offer to pay for a single slice (in fact, I’ve asked the waitstaff to name their price) and it still can’t be done. Either order the entire plate (and watch me waste all of it, as I want one slice –and I’ll eat less than a single slice, if that–) or order none at all.

Ditto for Carnegie and Stage.

True, I could go to Ess-a-Bagel (my favorite when in the city) or H & H and order it just the way I want it: a toasted everything bagel. cream cheese on the side with a slice of lox, and they will sell it to me just like that. But when my husband and I go to NY, which we love to do a few times a year, the first thing we do when we arrive is head straight to the 2nd Avenue Deli. It’s just what we do. We drop off our bags at our hotel and we head over there. It’s our thing. Doesn’t matter what meal time it is, we just go.

On the cab ride over, I’m thinking about the vinegary coleslaw and my diet Dr. Brown’s Cream Soda. Of course I can (and do) get my Dr. Brown’s back in Boston, but not with the coleslaw. I’m anticipating the argument I’m going to have with the stoic, stone-faced waiter who is going to tell me that he can’t sell me a single slice of Nova, even when I tell him that I could go to the deli counter, buy a few slices (if I was that kind of customer, which I’m not) and sit back down at the table with it (if I wanted to be a real pain in the ass, which I would never do, but that’s beside the point).

He knows I wouldn’t do it, I know I wouldn’t do it, but I have to point it out anyway. Knowing this, I still make the argument. Doesn’t matter: the waiter will still tells me that he can bring me the Nova plate with cucumbers, capers, Nova, tomatoes, red onions, olives, cream cheese, coleslaw, potato salad and the bagel. I’ll look at him, he looks at me (he never blinks), and he’ll point to it on my menu with the tip of his pen. Then he’ll use the tip of his pen to point to the price on my menu–$ 15.95. I’ll close my menu, nod, and that will be the signal that he’s won.

One of these days, someone will tell me the secret why someone can’t add a slice or two of Nova to the menu as a side order. Is it such a big deal? Of all the things I think about, a few times a year, I have to admit, this is one of them.

← Sugar Cookies with Royal Icing
The Gift of Shiva →