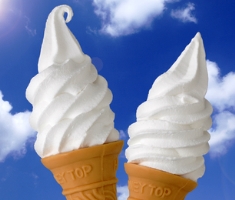 My father believed in a lot of things that pretty much summed up the kind of guy he was:

He believed in putting his family first.

He believed in making the best product he could possibly make and his customers loved him and his bagels for this relentless dedication.

He believed that if someone was kind (he used the word “nice” so often, it drove me crazy), there were few other things you need to know about them.

He believed that shoveling snow was the worst thing about living in N.Y.

He believed in giving a few dollars to anyone he saw who needed it. And I watched him do it over and over again. He was generous to a fault, for all of his life.

He believed that MASH and All in the Family were the greatest television shows of all time.

He believed in going for the joke (over and over again), until he got someone to laugh.

He believed in the healing powers of Carvel.

My dad was just about the best guy to be around when it came to ice cream. Never mind the ice-cream truck (although you could always count on him to be the first one to pull out his wallet whenever you heard the music or the bells. My dad was a Carvel guy. No matter the season, time of day, day of the week or what else was going on, if someone even mentioned Carvel, my dad would get his keys and we’d be on our way.

We would pile into my dad’s  Cadillac, drive 10 minutes to the local Carvel, and my dad would always get the same thing: soft-serve vanilla ice cream, hot fudge and a cherry. No whipped cream, no sprinkles, no nuts. With a cover, to take home. We did this so many times; I can still see the sundae being made, covered, and being put into the brown to-go bag with plastic spoons and napkins.

My brother and I loved the cherry and chocolate bonnets (remember those?!) with the hard shell over soft serve ice cream. Those were pre-made (cones) and we would take those home. My mother always had something with wet walnuts (yuck, still, to this day, sorry, Mom) and off we would go, to have our ice cream at home. If we stayed there to eat, my brother ordered a sundae in a baseball cup, while those were available. Remember the baseball helmet sundae cups? My brother must have had every single one of them lined up on his dresser by the late seventies. (Those of you who know what I’m talking about are smiling.)

If I had a bad boyfriend thing going on (Kenny Dulski, you a responsible for about five pounds in 1981, most of them from Carvel), it was off to Carvel (and hence, the lifelong food-makes-it-all-feel-better rollercoaster, but’s another blog for another day, LOL).

If we were bored: Carvel. Happy? Carvel. Friends over to visit? Carvel.

And let’s not even start with birthdays and birthday cakes. Those little crispy chocolatey things that are in the middle of the vanilla and chocolate layer? I could just eat those and call it a day. To this day, I buy Carvel cakes at my local supermarket (there isn’t a local Carvel in my town) for special occasions (homeruns, school plays, great report cards) and it reminds me of my dad.

As do so many other wonderful things.

← The Bendalas that Bind
Meatloaf with Mushroom Gravy →