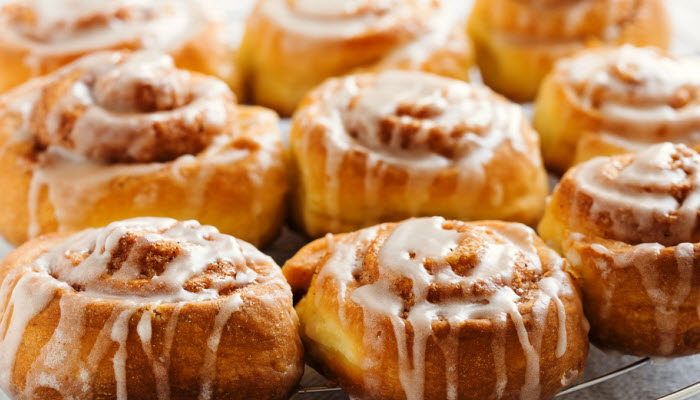 Iced, sticky, sweet, and delicious, these are the ultimate in brunch indulgence.

Backstory: There are few things in life that are better to wake up to than the smell of warm cinnamon rolls and if you’ve grown up around a bakery or worked in one like I have, you’ll know exactly what I mean when I say that there’s something crazy special that happens when fresh dough and cinnamon meet together in the oven. I simply don’t have the words (yes, a first for me). More of the Backstory after the recipe… 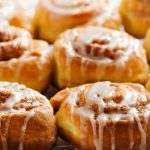 Sweet and sticky cinnamon rolls with just the right amount of icing and gooey-ness are a delicious indulgence your family will love. They're perfect for brunch, holiday get togethers or any time you want to do something truly special for breakfast or brunch.
Course Breakfast, Brunch
Cuisine American
Prep Time 20 minutes
Cook Time 25 minutes
Total Time 2 hours 45 minutes
Servings 14 rolls

For the Cinnamon Filling

…The Backstory continues: I want to be clear that I’m not talking about those monster airport or mall type of cinnamon rolls. No thanks.

These are a little smaller and less cloying (sorry, but it’s true.) They are full of sweet goodness from brown sugar, cinnamon and chopped pecans, but the flavors are not so overpowering that you feel you need to check your insulin levels after eating them. These are the real deal cinnamon rolls of your childhood, with a perfectly balanced sugar glaze that won’t put you to sleep after a little indulgence. Yes, they’ll make your fingers sticky (as they should after eating one — or two), but you’ll still be able to eat another meal in the same day.

There’s a difference between making a delicious baked good with balance and proportion versus dipping the entire thing in a bucket of icing. I prefer the former. Restraint, proportions and the ability to taste the spices and not be drowned out by frosting are keys to good baking. Or so said my dad, and his words were gospel to me when it came to all things relating to baked goods.

These are worth the effort and your family will love you for making them.