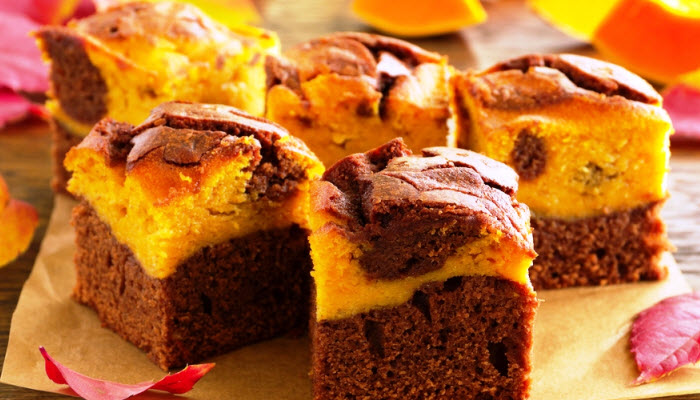 The Backstory: Brownies are a traditional American classic dessert, first made famous when Fanny Farmer put her recipe in her 1896 cookbook, The Boston Cooking-School Cookbook (seriously, who knew?). Believe it or not, good old Fanny’s recipe was actually a blondie, and had no chocolate in it whatsoever! Talk about confusion! Years later, several other cookbook authors, chefs, and restauranteurs claimed to have created the brownie, either by accident (oops, I spilled some chocolate in that recipe, and now it’s brown), or on purpose, and were left to quibble over who actually had the rights to the first brownie. More of the Backstory after the recipe… 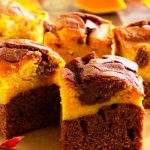 Rich, decadent brownies take on fall flavors with the addition of pumpkin, cinnamon and ginger for a delicious, sweet treat. These brownie bars are perfect for a Sukkot or Thanksgiving celebration and even better when topped with a scoop of vanilla ice cream.
Course Desserts
Prep Time 20 minutes
Cook Time 40 minutes
Total Time 1 hour
Servings 24 brownies

For the Chocolate Brownie Batter

For the Pumpkin Batter

…The Backstory continues: Either way, the brownie was born and since then, it’s been love at first bite. Whether topped with vanilla ice cream, mixed with nuts, or just perfectly plain and simple, you can’t really go wrong when you present your kids (big and fully grown) with a homemade brownie. Come to think of it, I’ve known a few grown men to go weak at the knees at the sight of freshly-baked brownies, especially those with some really chewy edges.

While we typically don’t associate brownies with any particular American or Jewish holiday, these brownies can serve double duty: both at Sukkot and at Thanksgiving when all kinds of squash and gourds (pumpkin) are typically eaten to celebrate the abundance of fall, bountiful harvests and the blessing of nature. And let’s not forget, our Jewish tradition of feeding our families until we simply cannot move after a meal.

And to this I say, one more reason to bring on the brownies.