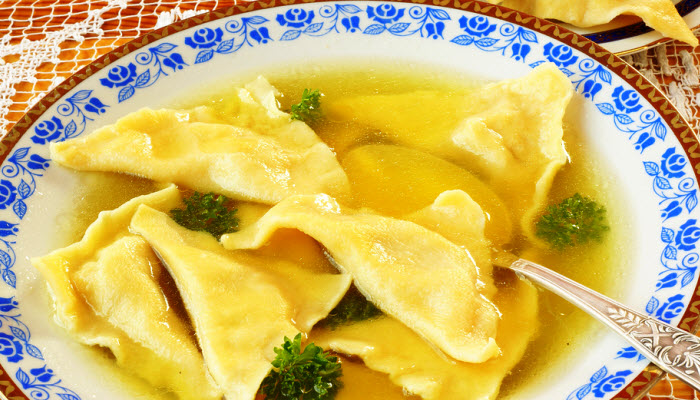 Tender dumplings in golden chicken broth are the cure for whatever ails you.

The Backstory: Kreplach, those delicious dumplings that bathe in our worshiped chicken soup, are one of the pillars of Jewish soul food. These meat filled pouches are also found in many different cultures around the globe and are just as treasured by others.  In Chinese culture, kreplach are known as wontons and are served in delicate soups or sometimes pan or stir-fried or eaten as a crispy snack. In Italian cooking, ravioli can be filled with meat, cheeses or combinations of spinach and cheese, (or many other delicious cheese, meat and vegetable combinations) and served with savory sauces, which are of course, fabulous for mopping up with crusty Italian bread. More of the Backstory after the recipe… 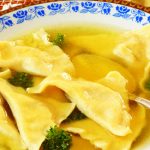 These delicious filled dumplings are tasty and a little chewy. When boiled, they are pale in color. Fried, they take on a golden hue. Either way they are delicious in soup or as a snack unto themselves.
Course Soup
Cuisine Jewish
Prep Time 1 hour
Cook Time 2 hours
Total Time 2 hours 2 minutes
Servings 6 servings

For the Chicken Soup

Note:  This dough can also be used for making noodles. Simply roll out the dough on a floured board (roll thin). Roll the dough up like a jelly roll and thinly sliced into noodles. Bring a pot of salted water to a boil and cook noodles for 5 minutes (check for doneness) at 5 minutes. You can cook longer as per your desired tates.

…The Backstory continues: And the list goes on and on.

The one thing these tender pockets all have in common is that they are made with a dough that is basically the same recipe and the resulting dumplings are often quite similar in shape.  The filling is typically meat-based.  Other cultures may vary by a few ingredients, but the recipe and cooking principles are similar.

A cousin of my father’s was at one time in her life, a professional cook.  She sometimes cooked for my mom.  She made the most magnificent kreplach for our family, and my sisters and I would go crazy every time. I remember that even though they were served to us in hot chicken soup, the leftovers were stored in the refrigerator.  I sneaked many of them out of the fridge and enjoyed them ice cold.  But most of all I remember them in my Mom’s Chicken Soup. I don’t know which I preferred better the kreplach or the matzo balls that she would make to go with her delicious chicken soup. They are both delicious, but each one brings a different taste to the soup. The matzo balls are usually soft with a hint of seasonings. The kreplach are made with a dough and usually more chewy, but the filling makes up for the chewiness. Either way you prefer your soup, there should be enjoyment into biting into the matzo balls or the kreplach. They are both on par with each other.

For this recipe I use ground beef.  I find the ground beef easier to work with but if you have leftover cooked brisket, that would be the best choice.  That’s my opinion, and I am sticking to it.  Either way, enjoy.