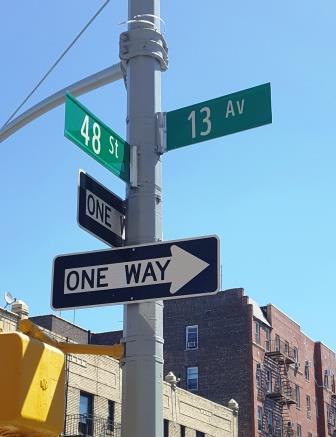 Are there any MASH fans out there? I always remember that somewhere in either the opening credits or maybe it was just always in the background, but anyway, there was one of those wooden signposts with signs and arrows painted with the names of the cities and small towns representing the men and women of the 4077th mobile army surgical unit that found themselves in that hellhole in South Korea. That signpost was in so many shots that it became a fixture of the show

Well, South Korea is a long, long way from Brooklyn, New York, but the memory of the intersection of 13th Avenue and 48th Street in Borough Park, Brooklyn, is so emblazoned on my brain, because just a few shops in from that intersection was where my father had his bagel bakery, 13th Avenue Bagels, for most of my childhood. And if I close my eyes, and I often do, I can see the street signs, hear the hustle and bustle of Borough Park’s main shopping district, and I can almost smell the bagels as they came out the massive oven that took up half the shop.

I literally grew up in that bakery–from age seven on when my dad first opened it until I left for college just before I turned 18. I worked the register, stocked shelves, helped lay the bagels on burlap covered boards and patted down the seeds on the their steaming, sticky, tops, just before the went into the oven.

I learned how to deal with customers (humor), snarky vendors (humor), local rabbis whose Shomer Shabbos endorsement meant success or failure (surprisingly, humor again), and how a quality product made consistently without shortcuts or gimmicks was more than half the battle. The other half was my father’s personality, who knew his customers by names, was something of a Catskills comedian and loved to kibitz with everyone who stepped foot in his store, and who worked hard day after day, no excuses, few days off. He was the original “time to make the donuts” guy, except he made the bagels. By hand. No machines doing the work for him.

The long lines outside his door when his shop re-opened on Saturday night after Shabbos was evidence of his fine work, and I have to be honest: I’ve had all the other bagels that those who supposedly know bagels swear by–NYC bagels (I won’t name the two major players–everyone knows them and yes they are wonderful –I’ll give both of them an 8, but they’re not as good as my dad’s were), the Florida bagels made by transplanted New Yorkers (sorry, but no), the Chicago bagels (I lived there for 10 years and so I’ve tried them all). Uh, no.

I live near Boston and there are some that are partial to a local bakery in the Brookline area, but I’m sorry to disappoint. Excellent hamentaschen. Marginal bagels. There is one very good place in West Newton called Rosenfeld’s. I’ll give them a shout out. They come within throwing distance of my father’s. That’s saying something. A solid 9.

But, to tell you the truth: there has yet to be anyone who can turn out an onion bagel like my dad could . And I’m not saying this to be stubborn or father-daughter biased. My father took off his apron some 20 years ago and sadly, my father has been gone for almost 4 years. I’m desperate for a good onion bagel.

Please, put this baker’s daughter out of her misery. If you know of the world’s best onion bagel (I’ll settle for something on the east coast), share the love and pass on the info here!