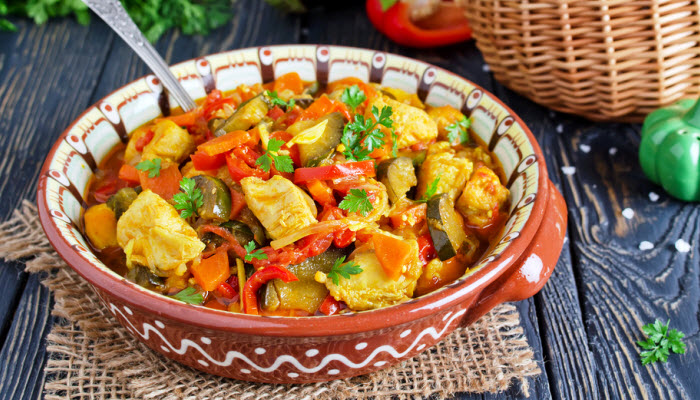 Chicken with eggplant is a Middle-Eastern inspired dish that’s tender, flavorful, and surrounded by the most delicious, savory sauce. This dish is even better the second day so make a large batch to ensure leftovers.

The Backstory: I have ordered different varieties of chicken with eggplant many times in  restaurants and it’s one of my favorite dishes. Since chicken is used in almost every region of this world, there are many variations that make chicken dishes unique. However, using it with eggplant well, that veggie places this mainly in the Middle East. Eggplant also features prominently in Israeli cuisine, and the  surrounding Mediterranean area. You can find it in dips, spreads, couscous recipes, cold and warm salads, and in many grilled vegetarian dishes as well as dish’s that combine vegetables with other proteins. More of the Backstory after the recipe… 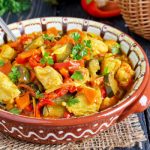 …The Backstory continues: This recipes is one that I made for my husband–surprisingly, since he had an aversion to almost all vegetables except corn, potatoes and creamed spinach. I had to remove all signs of vegetables in this dish and serve him chicken and sauce only. Me? I got the whole enchilada–chicken, sauce and a plate full of delicious vegetables.

This recipe is absolutely scrumptious when paired with rice, noodles, or any pasta of your choice. I actually refer to this as my chicken stew but whatever you call it, it is worth taking the extra steps to make this great dish.

← Chicken with Red Wine
Roast Chicken in a Hurry →